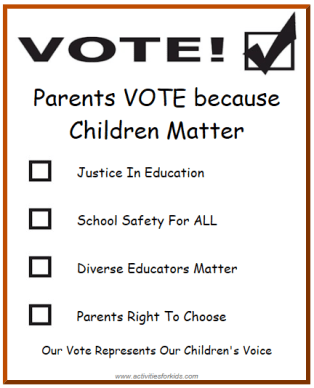 Hey parents and guardians of children, many of us are experiencing some serious anxiety right about now, because once again, we are in back to school mode and primary/general election season. This means, as parents and guardians, it is our absolute unapologetic right and responsibility to ensure every education decision-maker, and those running for public office remember that our children’s safety, the quality of their education and their overall well-being is a priority. And THAT is non negotiable.

“Children should be able to live a life free from bullying and harassment and it is time that we all took a stand against this.” Katherine Jenkins

Making a choice to be “that” parent and guardian means that we must always exercise our constitutional right to vote, even if this two party electoral system and its messy politics and the choice of candidates leaves a bad taste in our mouth.

So why vote? Because our vote represents not only our voice but the voice of our children.

Let us be very clear, we as parents and guardians, are our children’s “union rep” charged with protecting their safety and educational interest at home, school and in the community. There is absolutely NO gray area to this fact!

But voting is not enough! It is equally important to be very present and active in our children’s K-12 educational journey because sitting on the sidelines, crossing our fingers and hoping for the best is not a viable option while so many schools continue to fail to keep our children safe, equitably and justly educated.

Let us be very clear, Hope is not a strategy! As parents and guardians, we must be hands-on, question asking, open to learning new strategies to help our children learn and thrive, and woke parents – despite life challenges. These children are our children and their safety, education and overall well-being begins and ends with us.

“Taking responsibility for our children’s K12 academic and life journey is something we must do, not something that is done for us – but with us.” – Gwen Samuel, Founder of the Connecticut Parents Union.

Taking responsibility for our children’s educational journey also means not giving free passes to leadership in education and those running for public office who do not address school safety, as a whole, because school safety is more than just school shootings.

I was blessed to be part of an historic primary election victory last week when mom and 2016 National Teacher of the Year Jahana Hayes became Connecticut’s first African American woman and Democrat to win a primary for Congress and if she is elected in November’s general election, she will still represent an historic first.

I was grateful that Hayes mentioned school safety during her acceptance speech but to be honest, I felt that part of her speech sounded like that all too familiar Democratic party rhetoric that is disconnected from the realities of certain populations of students. I actually wondered if her “new found” colleagues in the Democratic party, that did not initially endorse her, encouraged that part of the speech, now that she beat the status quo odds and won the primaries. I had to wonder were Jahana Hayes Democratic colleagues going to try and use her, due to the fact that she is Black, to exploit the Black vote and push their school safety agenda that is mostly focused on gun violence and not the issues of bullying, racism, school to prison pipeline  and increased sexual assault in schools at the hands of school employees.

Let’s not get it twisted: School safety is about more than guns, especially for black and brown children.”

If there is one issue that unifies parents across America, it is the safety of our children. Yet sadly, when push comes to shove, our elected officials ignore the needs of children because they’re too young to vote and/or they come from the “wrong zip-code” and they don’t have money to donate to campaigns, PACs, or private policial parties.

As research indicates, American students have a one and 614 million chance of being the victim of a school shooting and yet based on the rhetoric of our elected officials and the constant news coverage, one would think school shootings are a daily occurrence. They. are. not.

If elected officials and candidates were to connect better to diverse real world parents and students and the reality we face every day, we would be in a much better place as a country. The real world, for most of us, is that we are compelled by compulsory school residency (aka zip-code) laws, into sending our children back to school at a time when school shootings cover the news but not bullying, lack of compliance to IEPs and PPTs, overall school violence to include sexual abuse at the hands of school staff are day to day realities.. So why isn’t anyone talking about that?

And let’s keep it one hundred. There is not a single elected official in Connecticut or across this country who would be willing to negotiate the safety of his/her own children. But somehow, some way, we think it’s acceptable to expect average every day parents, especially those of color, to be mandated, by law, to send their children to schools that they consider to be unsafe.

Think about the injustice of that for a moment.

According to the National Center For Educational Statistics – Fast Facts, as of the fall of 2017, about 50.7 million students will attend public elementary and secondary schools. Of these, 35.6 million will be in prekindergarten through grade 8 and 15.1 million will be in grades 9 through 12. An additional 5.2 million students are expected to attend private elementary and secondary schools.

So hear this all of you elected officials and those running for public office: if you choose to ignore the needs of our children, then please note, you can forget about securing the vote of millions of parents across the United States . It really is that simple.

If you are not talking about all the ways we need to keep children safe in school, don’t ask parents like me for our vote.

If you are not talking about ensuring that every child can access the learning environment that puts them on their best path to success and self-sufficient living, then don’t ask parents like me for our vote.

If you are not talking about how we must ensure that all children are treated fairly so that we dismantle the school-to-prison pipeline then don’t ask parents like me for our vote.

For the record candidates running for public office near where I live: I can have lunch with you and do a photo-op but that doesn’t mean I will vote for you. You will have to earn the votes of all of us parents and voting age youth, that requires more than food and photos.