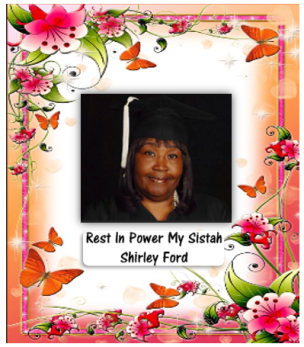 It is a sad day for those who fight unwavering to seek justice in education. We have lost an authentic voice in education reform. She was a children and parent’s champion, my inspiration, my role model, and my friend, Ms. Shirley Ford.

The truth is, I am full of mixed emotions as I struggle to write this short blog. Her passing puts me in a very reflective space as I think about the countless unsung Black and brown women – the mothers, grandmothers, daughters, sisters, aunts, friends and allies—throughout history, that have fought for liberation for the disenfranchised and marginalized, or more specifically in Ms. Shirley’s case, the children whose access to a safe and high quality educational experience has been denied because of their zip code and/or the color of their skin – Let us just keep it real!

One day I know the struggle will change. There’s got to be a change-not only for Mississippi, not only for the people in the United States, but people all over the world. Fannie Lou Hamer

The day that the struggle for equity and justice in education became tangible for me – as a parent leader -was January 6, 2010. In the very early hours of the morning, I received an email that said, We Did It – California Passes Parent Trigger!! 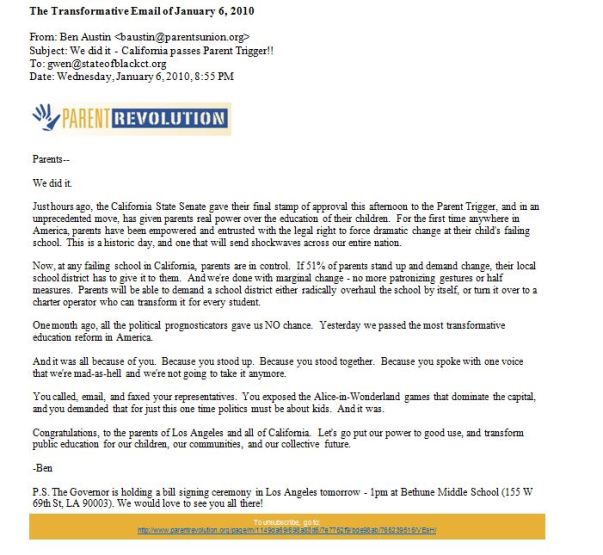 2010 was the year everything changed for me as a Black parent leader and education advocate.

An e-introduction to Parent Revolution from a mutual ally was all it took to set my gears into motion to take the parent empowerment fight in Connecticut to a whole different level. It was time for parents like me to move from a place of empowerment to a position of power in which we would demand the legal right to choose the best educational opportunity for our own children and for other people’s children.

This is the year I met Ms. Shirley Ford, the Co-Founder and parent organizer of the Parent Revolution, a California organization that organizes, trains and works directly with parents to help them tap into their God given power to secure a quality education for their children, children in their communities, and for all children.

It was official, the Parent Trigger fight moved from the West Coast to East Coast.

My meetings and multiple conversations with Shirley Ford taught me that the only way to truly protect the educational rights of children was to be unapologetic and completely committed to the promise that I would “not negotiate” when it came to the safety, education and overall wellbeing of children.

Shirley’s sentiments made me reflect on the words of  Marian Wright Edelman, founder and president of the Children’s Defense Fund (CDF.)

“We are living in a time of unbearable dissonance between promise and performance; between good politics and good policy; between professed and practiced family values; between racial creed and racial deed; between calls for community and rampant individualism and greed; and between our capacity to prevent and alleviate human deprivation and disease and our political and spiritual will to do so.”

Stay tuned. I will share more about my journey with California’s Shirley Ford, Parent Revolution and retired Senator Gloria Romero because it was their committed efforts to parent empowerment 4.0 that gave parents additional legal power in this country, via the parent trigger, to improve their child’s educational experiences. The first legal power being the Constitution of the United States!

One thing I am clear on. I am the unapologetic unbossed and unbought “warrior for ED justice” that I am because of conscious committed role models and mentors, past and present, both young and old, like Shirley Ford.

In addition, the next National Parent Convention that I attend or possibly host will be dedicated to her memory because Shirley always practiced what she preached despite the obstacles, both personal and professional, that tried to discourage her.

She was firm, fearless yet friendly! And I will most definitely miss her and her words of wisdom and as a collective of education advocates, we will miss her.

One thing is for sure, she literally made the world a better place for all children and their families, from the West coast to the East coast and many places in between and beyond.

“ …Well done, good and faithful servant; thou hast been faithful over a few things, I will make thee ruler over many things: enter thou into the joy of thy Lord” Matthew 25-23