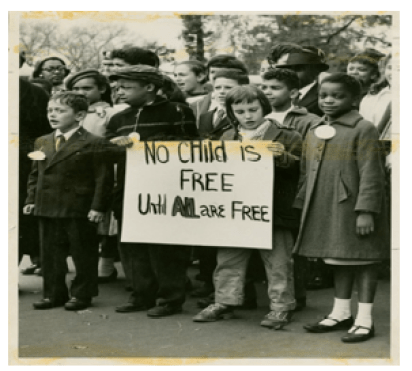 January first marked the end of the holiday season of good will towards man and the gifts of love that appeared abundant, since November, now seem to be fading fast for children, especially for our most vulnerable.

All the tax write-offs are in, and now, we are back to business as usual.

Y’all know what business as usual I am talking about; the systemic disparate treatment of Black, brown and/or poor children in educational systems across the Divided States of America.

“Here is yet another study that ought to prompt us to look at the role of deep-seated bias in how black children are treated.

The study, detailed in the new report, Girlhood Interrupted: The Erasure of Black Girls’ Childhood, is the first of its kind to focus on girls, and builds on previous research on adult perceptions of black boys. That includes a 2014 study led by Phillip Goff that found that, beginning at age 10, black boys are more likely to be viewed as older and guilty of suspected crimes than white peers…

Our Collective Silence of 2017

Because of our collective silence in 2017, we have emboldened the traditional education system to continue another 365 days of disproportionate suspensions and expulsion of Black and brown children including pre-school age babies as reported by 2017 Brown Center Report on American Education: Race and school suspensions.

The U.S. Department of Education’s Office for Civil Rights caused a stir in 2014 when it released data showing that black students are suspended and expelled at three times the rate of white students.

Black children in preschool are more than three times likely to be suspended than white children, according to data from the US Department of Education’s 2013-2014 Civil Rights Data Collection. Based on the findings of this new study from the Yale Child Study Center, one of the reasons for that racial disparity may be implicit bias on the part of preschool teachers.

Because of our collective silence in 2017, we have emboldened the gatekeepers of the traditional education system to continue another 365 days of their retaliation against Black, brown and marginalized parents because we dare to advocate for our rights as parents to choose the best education opportunity for our babies.

NAACP sticks by its call for charter school moratorium, says they are ‘not a substitute’ for traditional public schools.

Instead, why didn’t our NAACP demand fiscal and personnel accountability for all school models that serve children. Now, that recommendation would have been in the best interest of Black, brown and poor children.

Response from Black education leaders: A substantial number of black parents want to have the option of enrolling their children in high-quality charter schools. For many urban black families, charter schools are making it possible to do what affluent families have long been able to do: rescue their children from failing schools. The NAACP should not support efforts to take that option away from low-income and working-class black families

A blog in the USA Today written by 1963 high school student T. Willard Fair sums its up perfectly:

“Nobody cared when, for decade after decade, black kids were assigned to failure factories that set them up for a life of poverty and dependency. But give the parents of these children a choice to select alternatives, and suddenly the people who care about where these students go to school come crawling out of the woodwork.”

Because of our collective silence in 2017, we have emboldened the traditional education system to continue another 365 days of using the desegregation ruling of Brown v. Board of Education of 1954 to keep many of our kids trapped in unsafe and systemically failing so-called “integrated” schools.

This one blog Is Integration Your Silver Bullet? Time to Get Real keeps it one hundred about so-called “integration” in the 21st century!

“But wait. People are making it sound like you can drop a bunch of Black kids in schools with a bunch of White kids and boom—the systemic inequities and public policy failures that have deeply segregated our cities for generations suddenly vanish.”

And this. right. here. does it for this black mom!

Chris Stewart “when historically marginalized people exercise their right to choose a school they think is best for their children, that is justice, not segregation.“ 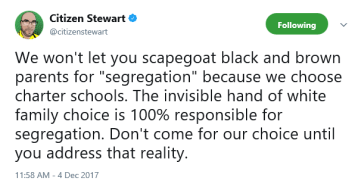 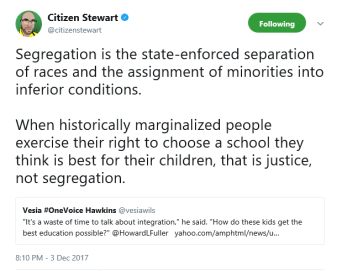 Sadly, the disparate treatment of black folk don’t just exist in education, the list goes on in the areas of healthcare, voting, employment, housing, child welfare…

Now, you may be asking why do I say “so-called” integration?

Well, if I have all the ingredients of a cake sitting side-by-side on the counter that does not mean I have a cake. Why? Because I have not integrated the separate ingredients into a mixture that produces one batter.
. 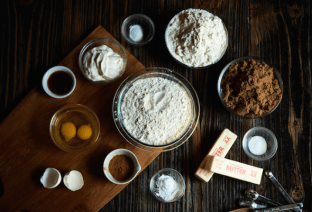 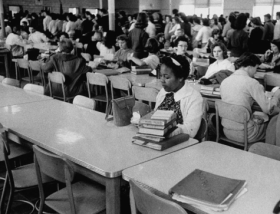 The bottom line! Our silence, as a people, about the oppression of our Black and brown children in schools across the Divided States of America, have made us their oppressors as well.

Our silence, is why all the black kids “still” sit together in the cafeteria 20 years later after Beverly Daniel Tatum’s landmark 1997 book Why Are All The Black Kids Sitting Together In The Cafeteria?

Hypocrisy in the so-called Movement For Justice

Today, January 15, 2018, God has given us another day to celebrate the birthday and legacy of Dr. Martin Luther King Jr.

Yet, 2017 was a year of much silence against injustice in education, which means, we did not live up to the legacy of Dr. King Jr., nor did we fight, as a sustained collective, for the dreams of our young Black, brown and poor children.

There is one thing that our silence did do! Our silence did condone the oppression of our babies and their dreams by “dream killers” within traditional education systems throughout the country.

In my opinion, what makes this moment in time so hypocritical is the fact that, throughout the day, people have pulled out their Martin Luther King Jr. clip art to celebrate his birthday by quoting him on Twitter, marching and singing Free at Last. knowing many of our Black and brown children returned back from holiday break to schools that we know will not equitably educate them because of the color of their skin or the zip-code they live in!

Let us be clear! If our Black, brown and poor babies aint #FreeToLearn in education then none of us adults of color are free!

“Only a fool would let his enemy teach his children.” – Malcolm X

It is time for us to own the fact that this is on us as Black and brown parents and community leaders.

Why? Because year after year, we celebrate freedom knowing we keep putting our children in harm’s way!  I have yet to see the Million Children’s March – just saying – again.

In addition, it is sad to note that the many people in decision-making roles in education, including some of my own people, seem to gloss over the fact that the very man whose legacy we celebrate today said from the jail cell of Birmingham Alabama, Injustice anywhere is a threat to justice everywhere.

“I am in Birmingham because injustice is here…so am I compelled to carry the gospel of freedom beyond my own home town. Like Paul, I must constantly respond to the Macedonian call for aid…Moreover, I am cognizant of the interrelatedness of all communities and states. I cannot sit idly by in Atlanta and not be concerned about what happens in Birmingham….We are caught in an inescapable network of mutuality, tied in a single garment of destiny. Whatever affects one directly, affects all indirectly… Anyone who lives inside the United States can never be considered an outsider anywhere within its bounds.”

It is now sixty-three years later since the historic Supreme Court ruling in Brown v. Board of Education of 1954 that declared segregated schools “inherently unequal” and unconstitutional, and our country is still treating Black and brown children as animals, sheep being prepared for slaughter.

The time is now to put into practice what we preach and march about every year during Dr. Martin Luther’s King Jr. birthday and February, Black History month!

Killing Us Softly – No, Not The Song

So, it is safe to say that the way we ended the year 2017 is the way we began 2018 because the New Year’s ball dropping in New York’s Time Square didn’t stop racial and economic discrimination – we do know this, right?.

Let’s just own that black history fact and keep it moving.

This is why “now” matters! Sixty three years since the ruling of Brown v Board of Education has been long enough for us to keep allowing the status quo to keep denying Black, brown and poor children equal protections under the law to allow them equitable access to educational opportunities.

It is 2018, there should be no more compromise. No more asking Black mothers to sacrifice their children’s safety, education and overall well-being until our education system, founded on institutional racism, decides it wants to treat our babies as little human beings

If the life and legacy of Dr. Martin Luther King Jr. and the other #FreedomFighters, that bled and died before us and the countless suffering of those who needlessly died in the 21st century, don’t move you to fight for the freedom of our children – What will?

Let us be very clear and own this truth! “If you are neutral in situations of injustice, you have chosen the side of the oppressor.” Desmond Tutu.

One thought on “Why “Now” Matters? Because 63 Years Is Long Enough Our Kids Can’t Wait No More”