“Any situation in which some men prevent others from engaging in the process of inquiry is one of violence;… to alienate humans from their own decision making is to change them into objects.” Paulo Freire

As a Black mom with children in public schools, it troubles me to learn that you, Reverend Al Sharpton, have just declared war against Black, brown and poor parents who choose to put the safety, education and overall wellbeing of their children and all children above everything else, especially “pay to play”, quid pro quo, partisan politics! 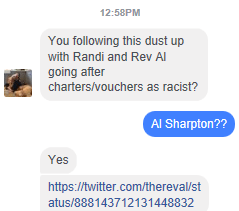 I have met you on several occasions and I have the utmost respect for your leadership even if I do not always agree with you, I respect your documented history of standing on the side of equity and equality for the black, brown and poor community, even if you stood alone! That takes courage. 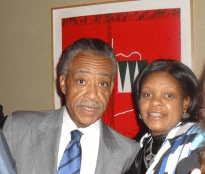 First, the NAACP, of which I am a member, chose to declare war against all Charter schools, even the very successful ones, versus them fighting against any unsafe and/or failing public school, regardless of the model. Now you, the legendary Reverend Al Sharpton, has fallen for the hype of the “accountability to children doesn’t apply to us,” American Federation of Teachers President Randi Weingarten. You go so far as to call Randi your sister! 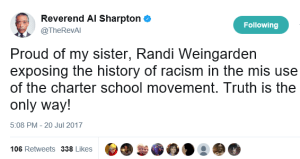 Why the flip flop? Is this about some kind of quid pro quo?

Would your “real” sister or other community member see your child or any child sexually, physically and mentally abused in a public school and say and do nothing?

The “sistahs” I know would not only say something if a child was being abused they damn sure gonna do something!

What about our Black and brown babies in the child welfare and foster care system– they are already in a traumatic situation- who is fighting for them? They are our babies too! If there are ever issues or questions about their safety in our public schools they should have the right to choose another option so they aren’t re-traumatized!

I live in Connecticut, where our laws make it safe for sexual assault and other forms of child abuse, at the hands of school employees, to happen freely in our public schools without fear of arrest or prosecution.

Are you Rev. Al Sharpton saying parents in Connecticut like me, shouldn’t have the right to choose to keep their children safe, regardless if the classroom “appears” to be integrated or segregated?

NO child can effectively learn in any classroom where there are issues of safety or disparate treatment because of the color of their skin or the zip-code they live.

Based on your words growing up, you know first hand, what it is like to be denied an opportunity because of the color of your skin. 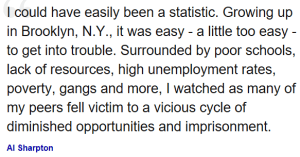 Reverend Al. Sharpton, your fight and my fight, as black people in the continued struggle for liberation, should not be about the school model or the form of a high quality educational opportunity – it should be about the opportunity for our babies of color and the poor to get a fair chance at an improved quality of life – starting with education.

Our fight should be against any persons, black or white, in the school and any decision makers that allow Black, brown and poor folk to be denied an equitable and safe education.

Did you know the NEA and CEA were silent in 2010 when the former Connecticut Attorney General Richard Blumenthal raised the alarm about child abuse in public school at the hands of school employees?

They were silent again in 2017 when the nonpartisan Office of the Child Advocate issued a similar report regarding school employees not reporting abuse and neglect at the hands of other school employees even though they are mandated reporters by law!

Neighboring Rhode Island just had two cases in recent months where mandatory reporters failed to comply with the law too.

Why take such a polarizing stance against parent and student rights to access safe and quality educational opportunities, especially aimed at the poor and marginalized?

What happened to your equality for all children “battle cry”  of 2011 when you rallied in support of single Black mothers like Kelley Williams-Bolar of Akron Ohio, the mother of two daughters who was given jail time for sending her children to her father’s school district a few miles away because she was concerned for her children’s safety. Or, Tanya McDowell of Connecticut who was arrested and convicted for sending her 5 year old black male to the school district near the shelter where she once lived!

You heard first hand from both Kelley Williams-Bolar and Tanya McDowell and you know the only thing they were guilty of was loving their children and doing what they felt was in the best interest of their children. Yet, “your sister” Randi Weingarten, year after year, fights to keep the very education system in place, through pay to play practices, that arrested them in the first damn place!

So Rev. Al Sharpton, I ask again, why fight against a parent’s right to choose what is in the best interest of their children? Do you believe parents voices even matter?

To refresh your memory, Kelley Williams-Bolar and I met you in September of 2015, at the 45th Congressional Black Caucus (CBC) Legislative Conference in Washington, D.C. 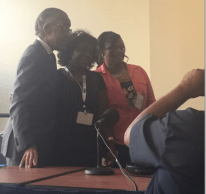 On your radio show, you stood fast on your belief that all children should have equal access to a quality education – period.

Again, so why the flip flop now? How did Randi Weingarten become “your sister”, your ally for equal education for all despite her business practices that are everything but equitable?

Again, why fight against a parent’s right to choose the best educational opportunity for their children? Keywords – their children

At the 2015 Congressional Black Caucus (CBC) Legislative Conference “your sister” Randi Weingarten strolled into a CBC session positioning herself to give us black folk a show. And she performed true to form.

I did not even see “your sister” Randi’s name on the original line up. She thought so little of our black community that she came on stage jumping into an awkward theatrical sermon like a black pastor on Sunday morning at this CBC “Education as a Civil Right” session.

It was clear she thought black folk only go to church, march and sing “We Shall Overcome.” To fit her narrative about us black folk , she positioned her entrance like a Sunday sermon. She wanted to prove that she was part of the village – you know – she was one of us.

Yet, I am pretty sure she was not there for the rights of black children or the rights of parents to choose what’s best for their children. I can only assume, it was AFT’s $300k contribution to the CBC that bought her a spotlight on our stage about our babies.

Randi seduced us black folk well!! At the end of this event the black folk in the room were calling her “sistah” too! I guess large donations will do it every time.

Everyone in that room ignored the fact that some of the teacher union’s educational policies deny children access to safe quality educational opportunities. Again, I will say for the record, the most glaring fact for me, as a parent, is they are extremely silent about the fact that school employees are not reporting abuse and neglect of children being abused in school at the hands of school employees–so that definitely doesn’t make her my sister. Truth be told, she’s not your sister either, Rev Sharpton, unless you have changed your position regarding justice and now believe children’s safety, and equity in education really doesn’t matter.

So again, as I close Reverend Al Sharpton, with your clear track record of fighting against injustice, why start now to discriminate against charter parents or any parent, regardless of zip-code, who made a choice to send their children to the educational option that meets their child’s need. Why fight against parent choice? As parents, we  want our kids to be safe and treated and educated justly – regardless of school model or high quality educational option.

So let me be very clear, the bottom line- they are OUR Children so it is OUR Choice – nobody’s choice but ours. I hope you can respect that fact.